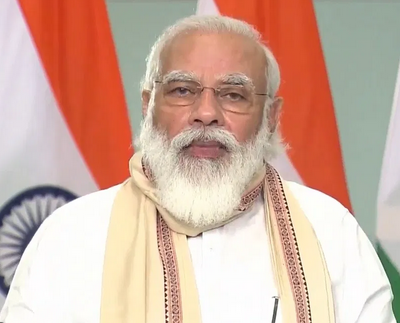 We have indeed come a long way; a full circle from Jawaharlal Nehru who ran away from the temples, to Narendra Modi who ran to the temples

Mahatma Gandhi once said: “The Ganges flows in the heart of man, but man is unable to bathe in it and is not affected by it. Of course, he wasn’t talking about Prime Minister Narendra Modi who would take the plunge into the holy river much later. And the Prime Minister knew exactly what he was doing.

In the space of 10 days, Modi traveled to Varanasi twice: first to inaugurate the Kashi corridor, then to launch several development projects. As usual, the national media televised and broadcast every nuance of Modi’s trip. The high profile and televised event was worth watching. It was a visual treat, well covered by private Doordarshan and public channels. Doordarshan’s 55 cameras didn’t miss a shot as the Prime Minister exited the Ganges after his dive at Lalita Ghat.

A good start for the man on whose charisma the BJP would go to the election campaign in UP. The Prime Minister, for his part, has done his job well. He gave enough masala to the media to broadcast and talk about it. He rained petals on the workers, prayed under the spotlight of the television cameras, sat on the stairs with the children and, of course, took a bath. It was a well orchestrated and executed event.

We have indeed come a long way; a full circle from Jawaharlal Nehru who ran away from the temples, to Narendra Modi who ran to the temples. In 1951, Nehru wrote to the then president and asked him to reconsider his decision to inaugurate the Somnath temple. Times have changed, and how! In 2021, the Prime Minister’s Temple Run is a media event anyone can savor. Modi’s penchant for events is well known. There’s “Howdy Modi,” “Namaste Trump,” the Chinese Premier’s Grand Tour of Gujarat, and Shinzo Abe’s trip to Benaras two years ago, to name a few. This time, however, Modi himself was the star attraction.

The Prime Minister’s choice of time and place is interesting, but a little confusing. The Rs 900 crore Kashi Vishwanath Dham (KVD) project or the Kashi Corridor project is still ongoing. It would be a newcomer to the election. Stepping away from Ayodhya only distracts attention from the Ram temple. Yogi Adityanath so meticulously nurtured Lord Rama – millions of lighted lamps, a statue of Ram on the drawing board, and the construction of a bhavya temple is underway. If that’s not enough, what is it?

Despite Modi’s best efforts, and let’s give him a long rope, the economy has not recovered. Financially exhausted, frustration is written all over the faces of people demonstrating in the streets of UP. Suppose he sincerely believed that demonetization would work and black money would flow. He sincerely believed that the GST would fill the government coffers. A zero balance account for the poor would trigger financial inclusion. And, of course, removing the Agricultural Commodity Market Committees (APMCs) would give farmers a choice. This would double their income. Unfortunately, Gujarat’s grand model has not worked nationally. All brands for trying, but it failed miserably economically.

India’s GDP has contracted 7.3 percent in the past year, according to provisional estimates from the ONS. It has been four decades since GDP was last in the red. India’s GDP for 2020-2021 has been the hardest hit in the country’s history. Double-digit headline inflation, near double-digit unemployment (9.3%) and low investor confidence are too much to handle without God’s intervention. The business climate is extremely low. In such a situation, only the blessings of ‘Maa Ganga’ can offer salvation.

One dilemma Modi faces is winning while having a CM of his choosing. He has to earn it to look good in the next general election. Yogi sometimes scores more points on Hindutva than Modi himself, much to his dismay. Despite the friendly walk, the underlying tension between the leaders is visible. The anti-tenure caused by blatant mismanagement of the pandemic is a sense of overlap in UP right now. The state is still suffering from the political scourge of Yogi. With a large body of voters – Brahmins, OBCs and Dalits in particular – appearing disheartened, there must be a unifying factor that transcends the plight of the caste. Even after repealing the three agricultural laws, the Western UP remains risky for the BJP.

Without a doubt, it was a great choice of time, place and God for ownership. Yogi took a firm stand in Ayodhya while the prime minister even took three years to visit the place. Modi had to go somewhere other than Ayodhya. Kashi also has an Aurangzeb link and is therefore handy for polarization. In addition, he also supports the shiv bhakti of his great rival Rahul Gandhi. The timing is perfect because it arrives a few days before the notification of the UP elections.

Modi’s plunge into the Ganges set the agenda for the UP elections. He would be fought on emotional religious issues rather than on fundamental existential crises. The Prime Minister is well acquainted with the road to 7, Lok Kalyan Marg, passes through the dusty alleys of UP. Whether lower Ganges would redeem BJP is something only time can tell. Until then, the Ganges flows quietly….

(The writer is a columnist and documentary maker. The opinions expressed are personal.)

Israel approves 4th dose of vaccine for most vulnerable