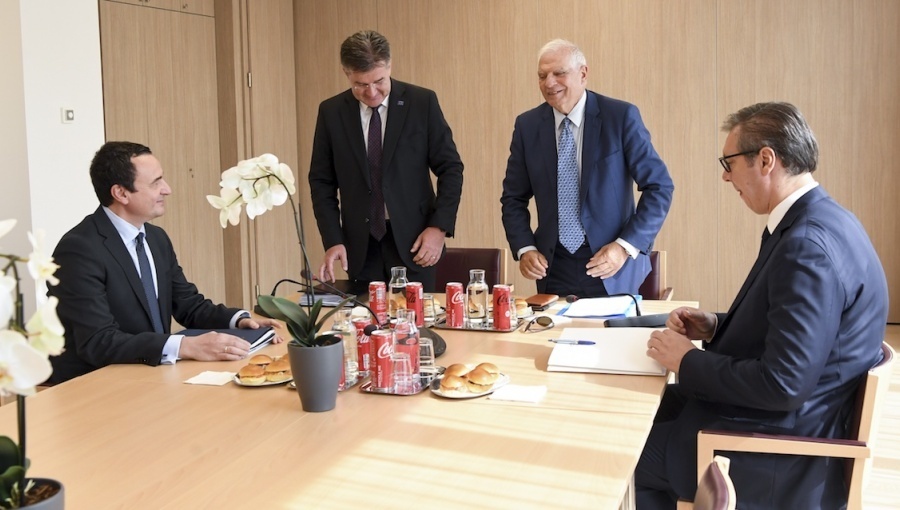 A deadline is approaching in Kosovo for the entry into force of controversial new rules on identity cards and license plates. If that happens, the move is expected to lead to a fresh outburst of protests in Kosovo’s volatile northern region. Senior EU and US diplomats are in the region to try to head off another crisis before the rules take effect on September 1.

As part of the measures announced by Pristina, ethnic Serbs will receive temporary identity cards and license plates to replace travel documents issued by the Serbian authorities. Ethnic Serbs living in Kosovo will need to obtain new license plates with the Kosovo country code RKS, which is not accepted by Serbia, instead of the KS code.

As the initial effective date of the measures, August 1, approached, Serbian officials described them as a step towards the expulsion of the Serb population from Kosovo. Officials in Pristina, on the other hand, argued that they were only denouncing the reciprocal measures which are the same as those taken by Belgrade for people traveling to Serbia from Kosovo.

Local Serbs in northern Kosovo reacted angrily, barricading roads leading to the border in the hours before the measures took effect. Narrowly averting a more serious crisis, Kosovo Prime Minister Albin Kurti announced on July 31 that Kosovo was ready to postpone the decision until September 1, if the barricades were removed.

Now, however, September 1 is fast approaching and despite a determined diplomatic push from EU and US envoys, there has so far been no compromise. Kurti and Serbian President Aleksandar Vucic met on August 18 in Brussels, but the meeting ended without an agreement. Since then, EU envoy for Serbia and Kosovo Miroslav Lajcak and US special envoy for the Western Balkans Gabriel Escobar have visited the region in an effort to avert a new crisis, but until present without breakthrough.

After the last meeting between Escobar, Lajcak and Vucic on August 25, Lajcak said the discussion had been “difficult but responsible”, while Escobar tweeted: “Difficult and long meeting just now with President Vucic. We appreciate the President’s commitment to peace and stability. The work continues. »

Vucic’s comment after the meeting, as reported by Serbian news agency Tanjug, was that he would not abandon vital national and state interests, or the interests and security of Serbs in Kosovo.

The main progress so far has been assurances from Kurti and Vucic that neither side wants the situation to escalate or an outbreak of violence on September 1.

In the shadow of Ukraine

Despite a long process of normalization mediated by the EU, relations between Serbia and Kosovo are periodically intensifying. The core of the issues between the two countries is that Kosovo unilaterally declared independence from Serbia – following a bloody war in the late 1990s – but Belgrade does not recognize Kosovo as a separate state. There is a significant minority of ethnic Serbs in Kosovo, concentrated in one part of the country, who look to Belgrade other than Pristina for leadership.

Russia supports Serbia in its determination not to recognize Kosovo and has helped prevent Kosovo from becoming a member of the UN and other international bodies.

With the invasion of Ukraine and speculation that we are entering a new era of the Cold War (although most of the former Eastern Bloc countries are now on the Western side), there are fears that Russia exploit existing tensions in the Western Balkans to destabilize the region. This concerns not only northern Kosovo, but also Bosnia and Herzegovina, where leading Bosnian Serb politicians have threatened secession from Republika Srpska, the Serbian entity in the county.

“Russia’s invasion of Ukraine adds fuel to the flames of tension in the Balkans. Moscow propaganda being spread in the Balkans by Russian media and disinformation agents is fanning the flames,” Capucine May, European analyst at risk intelligence firm Verisk Maplecroft, said in comments emailed to bne IntelliNews.

“Putin’s invasion has emboldened some of the most nationalist leaders in the Balkans, including Republika Srpska [Milorad] Dodik and Vucic from Serbia. The war fuels their pro-Serb rhetoric and increases tensions in the region,” May added.

Unnecessarily, Russian officials weighed in on the situation. On August 2, Russian Foreign Ministry spokeswoman Maria Zakharova urged the US and EU to stop encouraging Kosovo “radicals” to provoke Serbs in Kosovo and Serbia.

“Until the West realizes that the threat of undermining the fragile stability in the Balkan region is very real, dangerous experiments will continue. The responsibility lies entirely with the West and, above all, with Washington,” Zakharova said.

Meanwhile, Ukraine, which currently does not recognize Kosovo – mainly because Russia has used Western recognition of Kosovo to justify its own actions in eastern Ukraine – may reconsider its position in light of the new geopolitical situation in Europe. MP Oleksiy Goncharenko said on August 6 that he had tabled a draft resolution in parliament on the recognition of Kosovo.

Is war a possibility?

The current big fear is that a failure to resolve the situation by September 1 could lead to larger-scale violence in northern Kosovo.

As mentioned, the leaders of both countries have said they want to avoid any violence – but at the same time they seem to be playing with the public at home by pointing out the dangers of the standoff.

Vucic said after tensions eased in late July that “the most difficult scenario” in Kosovo had been narrowly avoided. He added: “We were one step away from disaster.”

He also spoke on several occasions about the need to defend the interests of the Serbs in Kosovo.

Kurti said in an interview with the Italian daily The Republic August 7 that the risk of a new conflict between Kosovo and Serbia is high, the situation having changed since the invasion of Ukraine.

“The first episode, a consequence of the fascist idea of ​​pan-Slavism that the Kremlin has, was the Ukraine. If we have a second episode, for example in Transnistria, then the chances of a third war developing in the Western Balkans, and in Kosovo in particular, will be very high,” Kurti added.

More recently, he called in an interview with the Papule for an increased peacekeeping force on the ground, saying it was needed because of “threats from Serbia and Russia”.

Verisk Maplecoft’s May spoke of the risks of misinformation on social media which, in the latest clashes, portrayed “the skirmishes as an all-out war”, and stressed that “tensions between Kosovo and Serbia are not in danger of tipping over towards total war”. .

“The risk of conflict is mitigated by the presence of the NATO-led KFOR peacekeeping force and ongoing international diplomatic mediation efforts. The fact that both countries – whether they admit it or not – still harbor hopes of joining the EU is another important factor,” May explained.

She also pointed out that “blockades and violence are relatively common phenomena along this border, especially with regard to the formalization of identity through license plates and identity cards”.

With little progress in the talks so far and no obvious path to compromise – Kurti has made it clear he has no plans to abandon the measures – the introduction of the new rules could simply be postponed again. But while moving the issue forward should help avert an immediate crisis next week, the two sides are no closer to the lasting resolution that is needed to normalize the situation in the region and for either side to move forward. towards EU membership.