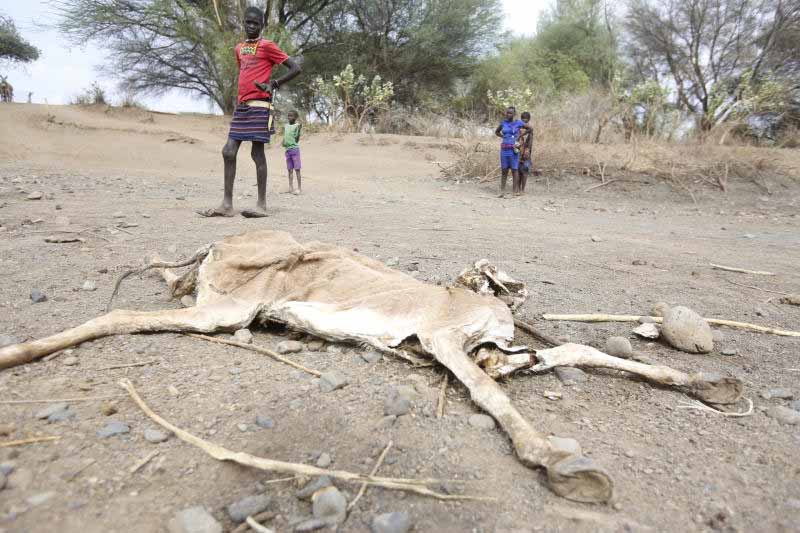 Climate change ‘the culprit’ of Rift attacks on water and rangelands

A whirlwind erupts, weaving its way through the parched shrubs near the Katikit watering hole in Tiaty, as shepherds rush to shelter under the few lone leafless trees. Katikit is the only borehole here. It is perhaps the only place where one can see cattle gathered together, and one would be forgiven for confusing it with a market. “I come from Laikipia. I had moved there because the pastures are abundant, but due to ongoing security operations, I left with my cattle. There, police are killing cattle,” says Mr. Simon Pkiyeny.

“I can bear to see the animals starve to death, but not to be shot by the police,” says Mr Pkiyeny, as he tries to support one of his emaciated cows apparently overwhelmed by the long wait for his turn to quench his thirst.

A messy cocktail of confusion, impatience and anxiety is evident on the faces of dozens of herders running to and fro to control hundreds of their animals waiting to drink water. Women and children are in this same mix, struggling to draw the little water. “I’ve been here for two hours. I don’t know when it will be my turn to fetch water,” says Mr. Chepo Semjo.

Villages in this constituency have been hit hard by persistent drought, making even the most basic staples unavailable. Months without rain have caused water basins to dry up as rivers and borehole taps dry up. Several animals have died, forcing herders to migrate in search of pasture and water, fueling conflict between communities.

In Akwitchatis Village, animal carcasses are strewn everywhere, rotting in the scorching sun.

Livestock, their only source of subsistence, are dying day by day, making the situation worse.

“I lost 11 cows. The others are very weak. We all risk perishing if it doesn’t rain,” Mr Nyagatiang’ Sigayang told Standard.

The village has only one functioning solar borehole, but it is equally insufficient for the inhabitants, as humans and animals are still fighting over a share of its contents.

The demand for water is so high that the storage tank hardly ever receives a drop. The population dependent on a single borehole is so large that it is sometimes necessary to wait a whole day to access 20 liters of water.

Few are patient enough to wait that long, and with no guarantee of returning home with water, even if it is not drinkable. They searched for alternatives, digging random spaces on an already dry river bed at River Akwitchatis to look for water.

“You have seen all these canoes. I’m the one who dug them unsuccessfully. It’s not a guarantee that when you dig you’ll get water…I’ve dug at least four without hitting water, but for this one I’m lucky at least it there is hope,” said Mr. Hassan Lomunyoteba.

A stone’s throw away, James Kukat is at the top of one of the rare trees to have resisted the scorching sun. He cuts the branches of the tree to feed his cows. “I have nothing to feed them; just these trees. I don’t know how long I will do this because the trees are getting fewer and fewer,” says Kukat.

At the Merkalei water basin in the Silale district, we find unattended camels staring at an already dried up spring. Being constantly on the move, they must have left a lot of water the last time they passed by this place. This time, however, not even a drop can be seen beyond the visible dry sand.

“We went without water for three months. We travel more than 20 km to fetch water in Nginynag. Some people have moved to other places. The cattle died. We can also follow the movement. We need more boreholes, and the existing ones can be improved by adding more solar panels and replacing them with bigger pipes,” says resident Ms. Emily Kigei.

In February, the Kenya Food Security Steering Group’s annual Short Rains Assessment Report showed that there were around 3.1 million food insecure people in marginal pastoral and agricultural areas, an increase of 48% since August 2021.

According to the United Nations, up to 20 million people in Ethiopia, Kenya, Somalia and Eritrea will need food and water assistance until mid-2022 due to drought, insecurity, economic hardship and conflict.

Mr. Paul Lotudo, an elder from Pokot, accuses the government of reacting slowly to disasters in the region.

In April last year, the government, through Spokesman Col (Rtd) Cyrus Oguna, announced that it had earmarked an interim budget of 2.282 billion shillings for the provision of emergency aid to 1 .4 million Kenyans affected by drought across the country. This may have been just a drop in the ocean as the drought situation in this part of the country is dire.

Mr. Jackson Kinyanjui, Founder of Climate Change Kenya organization and an expert in agricultural meteorology and climate change, says that when there is scarcity of water and pasture, cases of insecurity tend to increase, especially in the North Rift region, as communities fight for scarce resources. merchandise.

As residents grapple with severe water shortages, troubling instances of insecurity are making the situation worse.

In Mochongoi neighborhood in neighboring Baringo South constituency, at least eight people, including a police inspector, were killed by gunmen believed to be Tiaty herders. This happened within a month.

The same goes for cases in Laikipia, Baringo North along the Kerio Valley in Elgeiyo Marakwet County; Turkana and other areas bordering Tiaty constituency occupied by armed herders and their cattle, displacing, killing and maiming residents, in addition to stealing their cattle.

The threat of banditry in the region has claimed dozens of lives over the years, while hundreds of cattle have been stolen.

The report also states that 20,013 head of cattle were stolen from Turkana South sub-county and Pokot West county during the same period.

Due to insecurity, the numbers may have already doubled.

Mr. Julius Akeno, a Pokot professional and author of the book Patrons of Wild Suguta Valley, says the situation in Tiaty is getting worse every year. It calls for a concerted effort by state and non-state actors to find a lasting solution.

“Government and experts should visit Tiaty and find out what drives herders to move to other areas. Personally, I think that climate change has strongly affected the region in a different way. A few years ago, when I was a kid, the area had a lot of grass. But currently, even if it rains, nothing grows. The grass has been replaced by the same invasive vegetation, except for the hilly areas of Silale and Pakka,” says Mr. Akeno.

He says uncontrolled animal husbandry and the collapse of grazing patterns in the community have greatly contributed to overgrazing, forcing herders to move to other areas.

“Due to recurring drought due to climate change, pasture seeds have been depleted in the ground. In addition, a few years ago the community used to set aside certain parts for grazing only during the dry season so that the area would regenerate. This is no longer the case. This is why you see herders leaving Tiaty, causing conflict,” he added.

Every year when drought hits the North Rift region around the same time, banditry escalates.

Locals say it has been a cruel cycle and if the government does not find a lasting solution, the local community could be wiped out.

“If the government wants to solve the problems of insecurity in the North Rift, it should first find a solution to fight against the drought,” Mr Kinyanjui said.

With war on the side, EU warned of cybersecurity gaps