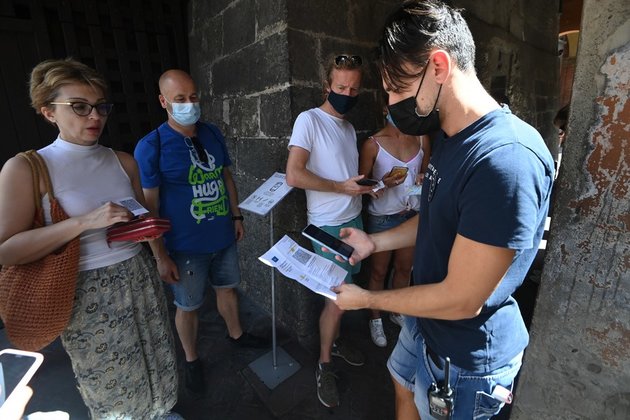 According to the European Center for Disease Prevention and Control (ECDC), there were nearly 380,000 laboratory-confirmed cases of coronavirus in the 30 countries of the European Economic Area (EEA) in its latest weekly report. This is the sixth week in a row that the weekly figure has fallen.

ROME, Sept. 18 (Xinhua) – Major indicators of the coronavirus are improving across Europe, although each country is using different strategies to deal with the spread of the pandemic.

According to the European Center for Disease Prevention and Control (ECDC), there have been nearly 380,000 laboratory-confirmed cases of coronavirus in the 30 countries of the European Economic Area (EEA), which includes 27 countries that make up the European Union, plus Norway, Iceland, and Lichtenstein, in its latest weekly report, which closed on September 17.

This is the sixth week in a row that the weekly figure has fallen.

This improvement occurred despite the large variations in the vaccination rate between EEA states. Less than half of the adult populations in Bulgaria, Croatia, Latvia and Romania are fully vaccinated, while in Denmark, Iceland, Ireland, Malta and Portugal the equivalent rate is over 85% each, according to data of ECDC.

The health rules against the pandemic also differ considerably from each other.

This week, Italy, for example, became the first European country to demand the “green pass” for health for all workers in the public and private sectors, which will come into force in mid-October. The “green pass” shows proof of vaccination, recovery from the virus, or a recent negative coronavirus test.

Lithuania adopted only slightly less restrictive measures this week, demanding the country’s “opportunity pass” for anyone to gain access to any stores selling non-essentials, beauty salons or gyms.

Slovenia unveiled similar measures this week, requiring proof of vaccination, a cure from the virus or a negative test to dine in restaurants, visit most non-essential stores or attend public events.

France, meanwhile, which has recorded nearly 7 million cases of coronavirus since the start of the pandemic, more than any other country in the EEA, said it would maintain its current health restrictions against coronaviruses despite a reduction in cases since the recent peaks a month ago.

The Netherlands recently announced that it will drop mandatory 1.5-meter social distancing rules, which go into effect on September 25.

Sweden, meanwhile, has said it will lift most coronavirus-related health restrictions at the end of this month, although it will continue to urge those showing symptoms of Covid-19 to stay at home.

Neighboring Finland said this month it would stop testing residents vaccinated for the coronavirus and lift restrictions entirely once 80% of the population aged 12 and over are fully vaccinated. As of September 14, around 57 percent of the affected population were fully immunized in Finland.

And in Malta, the government announced on Wednesday that most citizens returning to the country from high-risk areas can self-quarantine at home rather than in specially designated hotels.

Britain, which is not in the EEA, presented a multi-part plan this week that would see health restrictions relaxed in the fall and winter, unless there is a new peak of infections strong enough to put the health system under “unbearable pressure”.

If that happens, stricter rules involving the mandatory use of masks and tighter testing and isolation rules would come into force, the UK government said.

How democracy can win again