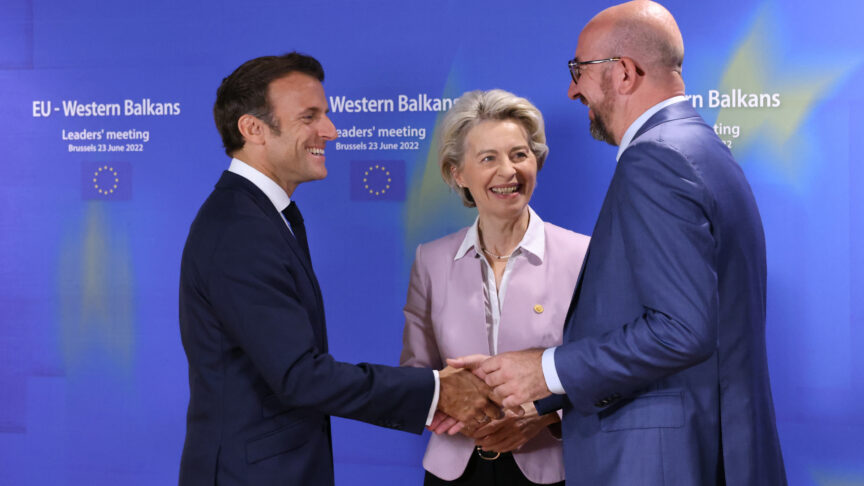 Since the European Council granted EU candidate status to Ukraine and Moldova, European policymakers have been debating French President Emmanuel Macron’s vision of a “European political community”. The Council’s decision, taken on June 23-24, refers to a proposal for a “wider Europe”, but does not explain what form this community would take.

The Council also recognized Georgia’s European perspective, anticipating the country’s candidacy once it fulfills certain conditions. In the context of Russia’s war against Ukraine, the Council’s decision is a show of solidarity with a war-torn Ukraine and a fragile Moldova. Furthermore, it underlines the recognition by Member States that the enlargement policy is a geopolitical tool – a tool that the EU can use to counter the destabilizing influence of third-party actors in its neighbourhood. However, this is a risky approach to enlargement. The historic decision on Ukraine, Moldova and Georgia could weaken the enlargement policy and increase the candidate countries’ vulnerability to external pressures.

The frustration of the Western Balkan countries with the Council’s decision illustrates the dangers of this approach to enlargement. They have long been irritated by the many obvious flaws in the enlargement process. For example, there is a fundamental contradiction between the ambitious reform agenda that the EU prescribes for candidate countries and the regional agenda that it promotes through its enlargement policy.

The EU uses its enlargement policy to settle regional disputes (such as that between Serbia and Kosovo) while simultaneously linking the progress of talks with one country to that of others. This has often left the countries concerned in a double bind, which has benefited some of them more than others. For example, Serbia opened new chapters in its accession negotiations despite the lack of progress in its democratic reforms. On the other hand, Albania has not yet started accession negotiations, although it has made real progress in its reforms. Indeed, the EU intends to open talks with Albania at the same time as talks with North Macedonia, which is still blocked by a Bulgarian veto.

As a result, some Western Balkan leaders are using the prospect of membership to bolster their influence at home, while failing to enact reforms and blaming the EU and its member states for the lack of progress. This is why many citizens of the Western Balkan states increasingly see EU membership as a moving target and are disillusioned with the process.

Therefore, the decision to grant candidate status to Ukraine and Moldova is risky for at least two reasons. First, there is the danger of over-promise and under-delivery – which would create frustrations in both countries similar to those now evident in the Western Balkans. Second, the EU might appear to be giving Ukraine and Moldova a “geopolitical cut”, i.e. supporting their EU candidacy because of Russia’s aggression rather than their approach. democratic reforms, the rule of law or economic convergence with the Union.

This signal would be particularly destructive for candidate countries in the Western Balkans and elsewhere, as they would have less incentive to build stable and transparent democracies with competitive economies. However, it would also be disastrous for the EU. If the rules and principles of reform no longer appear as prerequisites for EU membership, it would become more difficult for the union to adopt a firm position on these rules and principles in its member states. It would also show outside powers – mainly Russia and China – that EU enlargement policy is a matter of geopolitics. These powers could then exploit the period between countries receiving EU candidate status and membership to derail the process or increase their influence over potential member states. In turn, the candidate countries and the EU would become more vulnerable.

A European political community could help the EU to overcome these problems. By binding the candidate countries to the union, such a community would give them greater incentive to adopt reforms. In turn, these reforms would improve the cohesion of an EU of more than 30 member states – and help them resist external pressures. A political community would not replace EU enlargement, but a mechanism to help candidate and aspiring countries on their way to membership.

The benefits of membership in the political community should not focus solely on extending the single market, as this would give the impression that the EU is just a trading bloc. The union should rather support the reforms, to underline that it is a shared political project. In addition, it should offer security assistance to community members – helping to increase their resilience to a range of security challenges (including cyberattacks, misinformation and the use of corruption to undermine the political stability).

To achieve these objectives, the EU would not need to build new frameworks that could renew its experience with the Union for the Mediterranean. In fact, it could produce structures which are empty shells and which would give the candidate countries the impression that they have been herded into a second floor. The European political community should build on existing EU institutions and policies – and should find new ways to engage candidate countries.

The June meeting of the European Council inaugurated a new phase in the EU’s enlargement policy. But if the enlargement process continues to be purely technocratic, there is a risk that this will increase frustration about it in the EU neighbourhood. Meanwhile, a purely geopolitical approach to the process would lower the expectations of candidate countries and weaken everyone involved. Efforts to ease this tension will fail if they simply expand the single market or create an empty framework for the accession of candidate countries.

The European political community should not only be a forum for discussion, but also a new type of closer association between the candidate countries and the EU. As the union and its member states invent this new type of association, they should have the opportunity to reflect on the nature of the European project itself.

The European Council on Foreign Relations does not take a collective position. ECFR publications represent the views of their individual authors only.