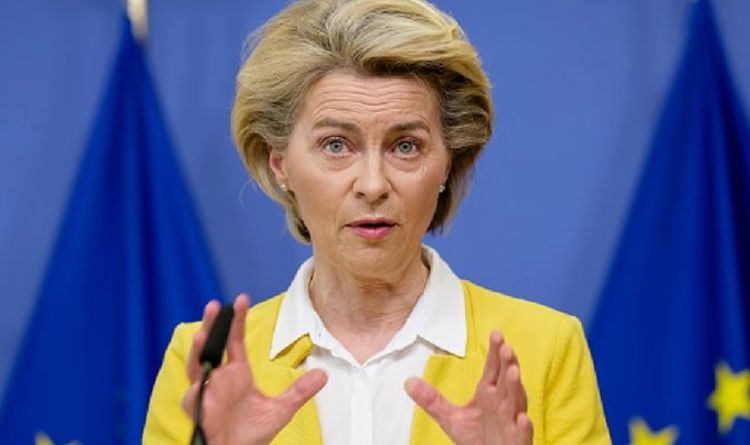 The President of the European Commission called the Balkan countries a “family” earlier this month, as she pledged to speed up the accession of six countries to the bloc. But Mrs von der Leyen’s ambition for a bigger EU has been castigated by French MEP Dominique Bilde.

Speaking in the European Parliament, the National Rally MEP said such a plan would lead to “the inevitable decline of the EU”.

Ms Bilde also claimed that with Brexit the bloc had lost an important financial partner who would be irreplaceable with the struggling economies of the Balkans.

She said: â€œThe enlargement process to the Western Balkans is a symptom of the democratic deficit in the EU.

â€œIndeed, 59% of French people oppose it. The figures for other Member States, such as Germany and Austria, are similar.

â€œThis massive rejection contrasts with the apparent fait accompli emanating from the European authorities. For example, the President of the Commission said at today’s summit that the Balkans are already “part of the EU”.

“This enlargement is not only a democratic aberration, but also a social and economic catastrophe. Firstly because with Albania, Kosovo and Bosnia-Herzegovina (excluding the Serbian Republic), the EU integrates for first time of states with a majority of Muslims and, above all, with a radically imported Islam.

â€œIn fact, the region unfortunately stood out for having the highest concentration of returning jihadists from Syria or Iraq in Europe.

â€œMoreover, while the EU has lost, with Brexit, a major net contributor and one of its economic engines, these countries are undeniably lagging behind in this area.

â€œAlbania stands out in this regard with the lowest minimum monthly wage in Europe.

â€œThe textile sector, which is starting a timid renaissance in my region of the Grand Est, will soon be swept away by this massive dumping.

â€œIn short, this insane project confirms the inevitable decline of the EU. This decline is all the more obvious given the dynamism of the United Kingdom since its departure, defying all predictions.

The 27 leaders of the European Union pledged future membership to their six Balkan neighbors last month, reaffirming a commitment first made 18 years ago, but dismissed calls for a 2030 target for fear of ‘a backlash at home over migration.

After weeks of deliberations, EU leaders agreed that Serbia, Montenegro, Bosnia and Herzegovina, North Macedonia, Kosovo and Albania have a place in the world’s largest trading bloc if they fulfill the criteria in areas ranging from judicial reform to economics.

But with the “enlargement process” blocked by various disputes in Brussels and Serbian political leaders reluctant to recognize Kosovo’s independence in 2008, many in the Balkans see the EU’s statement as an empty statement.

“The EU reaffirms its unequivocal support for the European perspective of the Western Balkans,” said the summit’s final declaration.

“The EU reconfirms its commitment to the enlargement process,” he said, although leaders insisted that the bloc focus on “credible reforms by partners, fair and rigorous conditionality and the principle of its own merits “.

French President Emmanuel Macron adopted a conciliatory tone, saying the Balkans were “at the heart of Europe” and deserved a path of accession.

Northern countries like Denmark, France and the Netherlands fear a repeat of the precipitous accession of Romania and Bulgaria in 2007 and the poorly managed migration of workers from Eastern Europe to the Greater -Brittany which turned many Britons against the EU.

Bulgaria is against North Macedonia, already a NATO member, which has joined it due to a language dispute.

The EU is by far the largest foreign investor and trading partner of the six countries that emerged from the break-up of Yugoslavia and the ethnic wars of the 1990s.

But an attempt by EU presidency Slovenia to make 2030 a target date for all six countries to join failed and the bloc also failed to deliver on tangible promises to citizens, such as the visa-free travel to Kosovo.

German Chancellor Angela Merkel and Dutch Prime Minister Mark Rutte have said setting a deadline for membership goes too far for many EU states. “I don’t really believe in setting dates, I believe in keeping our promises: once the conditions are met, membership can take place,” Merkel told reporters.

Bringing the 27-nation club to 33 members would complicate its tense decision-making and require an internal EU reform that few states want to undertake, something Macron and EU Council President Charles Michel have acknowledged. to journalists.