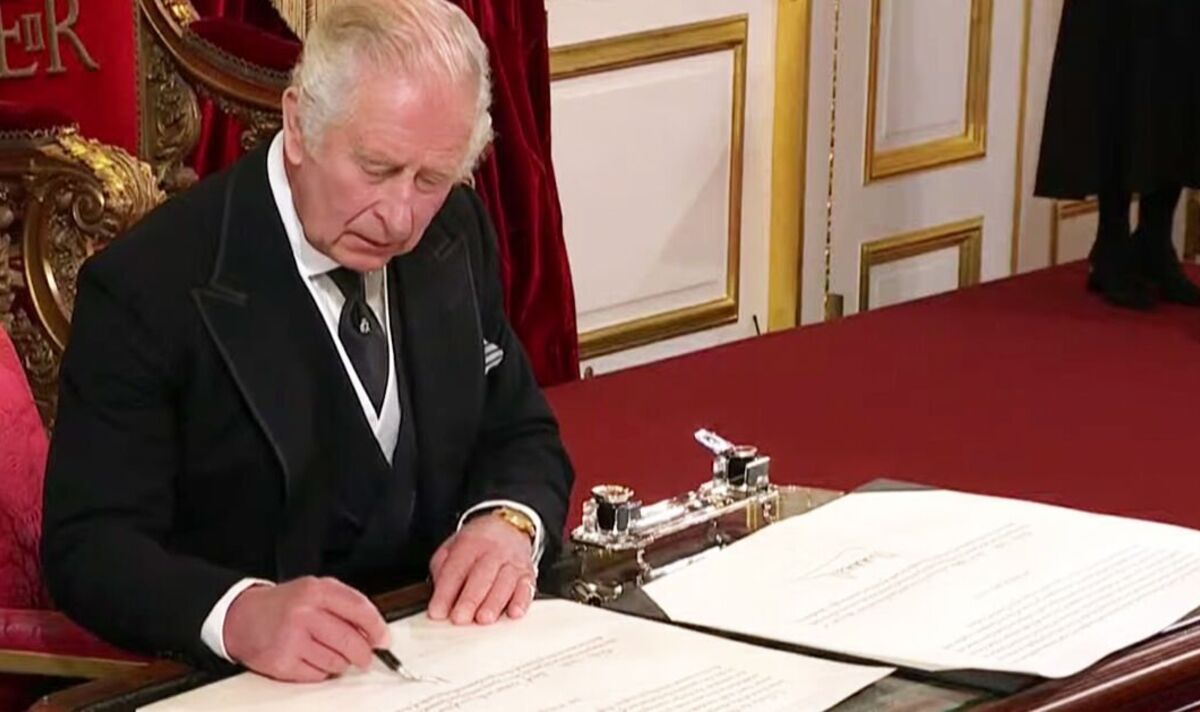 Leading politicians, bishops and royals led by Prime Minister Liz Truss came together this morning to present the first televised version of an age-old tradition. In an event steeped in history and the pomp and circumstance of the British state, the Membership Council made up of around 200 of the 700 Privy Councilors – Britain’s most senior politicians – met this morning in the State Apartments of St James’s Palace to confirm the new King in his absence. The event, which was broadcast live for the first time, has not been seen for more than seven decades since King Charles’ late mother, Queen Elizabeth II, was proclaimed after the death of her father George VI. Attendees included former prime ministers David Cameron, Boris Johnson, Theresa May, Tony Blair and Gordon Brown. Labor Minister Lord Mandelson, Prime Minister Nicola Sturgeon and former Liberal Democrat Deputy Prime Minister Nick Clegg also attended.

The event was chaired by Lord President of the Council Penny Mordaunt, who was only appointed on Tuesday less than 48 hours before the Queen died.

High-profile figures including new Queen Consort Camilla and Prince William, who is now the Prince of Wales, were dealt with and took their places at the head of the council.

The Clerk of the Council then made the proclamation which was signed by the principal Privy Councillors, including the Prime Minister and the Archbishops of Canterbury and York.

Privy Councilors are appointed to advise the monarch and are made up of current and former cabinet members as well as the Leader of the Opposition and former holders of this title.

Reading the text of the proclamation, the Clerk of the Council said: “Whereas it has pleased Almighty God to call to His mercy our late Sovereign Queen Elizabeth II of blessed and glorious memory, through the passing of which the crown of the United Kingdom of Great Britain and Northern Ireland belongs solely and rightly to Prince Charles Philip Arthur George.

It ended centuries of Privy Council meetings held out of public view and, for the first time, the public saw the monarch giving his approval to state orders, including the delivery of his own proclamation in Edinburgh, Cardiff and Belfast.

The King made his declaration and read and signed an oath to maintain the security of the Church in Scotland and to approve the Orders in Council which facilitate the continuity of government.

The modern status of the Proclamation comes from the Act of Union 1707 which also included the oath to maintain the security of the Church of Scotland because the monarch is the official head of the Church of England.

When Scotland became a United Kingdom with England, it was feared that the national Presbyterian faith would be superseded there.

There are two copies of the oath signed by the king, one remaining in England and a second sent to Edinburgh.

However, the tradition dates back as far as the Saxon kings before the Norman Conquest, when leading men gathered and decided who was the true listener of the god King Woden.

Charles made his personal statement about the death of his “beloved mother”, who passed away peacefully at the age of 96 at Balmoral on Thursday.

He paid tribute to the late queen, spoke of the grief his family is going through and pledged to take on the task ahead and the “heavy responsibilities of sovereignty”.

Charles’s speech came in the poignant and somber second part of the ceremony – when the proceedings took place in the palace’s throne room – and was effectively the king holding his first Privy Council meeting.

A number of procedural matters were settled, including the King approving the day of the late Queen’s state funeral, which is due to take place at Westminster Abbey in central London on September 19, to be a holiday.

To the sound of heralds after the Membership Council, the main proclamation was read at 11 a.m. from the balcony overlooking Friary Court at St James’s Palace.

The proclamation was read by Garter King of Arms, accompanied by the Earl Marshal, other Officers-at-Arms and Sergeants-at-Arms, followed by a salute of arms, singing God Save the King and three traditional cheers for His Majesty.

Then, at noon, a second Proclamation was read in the City of London, on the steps of the Royal Exchange.

The Privy Council also includes members of the Royal Family, including heir to the throne Prince William, who was named Prince of Wales by his father yesterday.

The Accession Council today saw the current Cabinet invited and Sir Keir Starmer with a ballot for the remaining 200 places, as there are currently 700 Privy Councillors.

Upon accession, a new sovereign is also required to make what is known as the declaration of accession. This is usually not done at a meeting of the Accession Council but in the presence of Parliament at the first official opening following the monarch’s accession to the throne or at his coronation, whichever comes first. King George VI made the statement during his coronation.

The House of Commons will then sit today where Prime Minister Ms Truss and other senior MPs will re-swear their oath of allegiance to mark the accession of the new monarch.

In the past, monarchs had to be crowned before being accepted as sovereign, but the law dating from 1707 meant that the heir of the deceased monarch automatically became sovereign.

The date of King Charles’ coronation will be set at a later date as a national celebration of his accession to the throne.

King Charles said: “It is my most painful duty to announce to you the passing of my beloved mother, the Queen.

“I know how much you, the entire Nation – and I think I can say the entire world – sympathize with me for the irreparable loss we have all suffered.

“It is the greatest consolation to me to know the sympathy expressed by so many to my sister and brothers and that such overwhelming affection and support must be extended to our entire family in our loss.

“For all of us as a family, as well as for this kingdom and the great family of nations of which it is a part, my mother has set an example of love for life and selfless service.

“My Mother’s reign has been unequaled in its duration, dedication and devotion. Even as we mourn, we give thanks for this most faithful life.

“I am keenly aware of this great heritage and of the duties and heavy responsibilities of Sovereignty which are now vested in me.

“In assuming these responsibilities, I will endeavor to follow the inspiring example given to me in the maintenance of constitutional government and to seek the peace, harmony and prosperity of the peoples of these islands and of the kingdoms and territories of the Commonwealth around the world.

“In this purpose I know that I shall be sustained by the affection and loyalty of the peoples whose Sovereign I have been called to be, and that in the discharge of these duties I shall be guided by the counsel of their elected parliaments. In all of this, I am deeply encouraged by the constant support of my beloved wife.

“I take this opportunity to confirm my willingness and intention to continue the tradition of ceding hereditary revenues, including the Crown Estate, to my Government for the benefit of all, in return for the Sovereign Grant, which sustains my duties official as Head of State and Head of Nation.

“And in fulfilling the heavy task entrusted to me, and to which I now dedicate what remains to me of my life, I pray for guidance and help from Almighty God.”