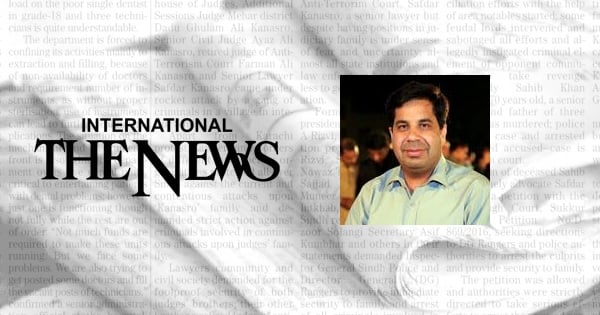 
The writer, a Chevening Fellow, studied international journalism at the University of Sussex.

As the Biden administration prepares to complete the withdrawal of its forces from Afghanistan, the region is changing. The post-withdrawal scenario has forced countries in the region to rush to the drawing board to draw a new assessment of the situation in Afghanistan and to think of more innovative ways to deal with the fallout.

There is a noticeable anxiety generated by the prospect of further surges of violence taking hold of the war-torn country and spreading to neighboring countries. The outgoing Americans may have suffered from war fatigue, aided as much by the ambiguity of long-drawn war objectives as by the history of Afghan conflicts involving the great powers.

The lesson that no invading power ever came out with a victory was reinforced by the latest withdrawal of the world’s most powerful army. Americans are perplexed that Afghanistan will become a breeding ground for terrorism. Therefore, all efforts to establish bases for what they call “counterterrorism operations”.

The biggest political tumble under the weight of circumstance has been India’s awareness of the Afghan Taliban, something unimaginable before President Biden’s announcement to step down given the history of disagreements between them.

Pakistan, being an immediate neighbor with legitimate interests in Afghanistan, has its work cut out for it here. On the one hand, it must prepare for the likely increase in violence perpetrated by the TTP and the arrival of more refugees in the country. On the other hand, dealing with the recalibration of ties with the United States, a euphemism for increased demands through a proverbial stick and carrot policy, presents a serious challenge.

In the face of such rough waters that will test Pakistan’s ability to tackle another challenge with implications for its security, economy as well as pressure for regional connectivity, policy clarity is the first requirement. The country’s history is replete with examples where darkness marked decision-making at pivotal times, leaving people guessing at “terms of engagement”.

Given this history, clarity as well as articulation of political goals is not precisely a Pakistani thing.

It is in this context that the recent engagement of Prime Minister Imran Khan with the foreign media must be analyzed. By carefully choosing a few television channels as well as newspapers for his interviews as well as an editorial, the Prime Minister presented Pakistan’s foreign policy position on a multitude of issues essential to peace, stability and economic development in the country. country. .

A close review of these media engagements shows how Prime Minister Khan approached issues relating to the evolving nature of our relations with Afghanistan, the United States and India in light of the latest situation on these points, in addition to define the main parameters of engagement.

Pakistan’s desire to prioritize the pursuit of geo-economy as a key factor in the country’s foreign policy has been at the heart of the positions it has taken. Only recently exposed during the Islamabad Security Dialogue, the backbone of geoeconomics is becoming more and more visible in political statements, although the exact details in terms of short, medium and long term goals remain to be defined.

On Afghanistan, Pakistan’s position represents a welcome start. He is informed by the lesson of history: to choose sides in a country bitterly divided along ethnic lines has done more harm than good for the country. In addition to being held accountable by rival factions for whatever went wrong, thereby gaining their opposition, Pakistan has been the scapegoat of the world community, primarily the United States, for the mess they made. ‘failed to clean up despite pumping out trillions of dollars and deploying the fiercest of war machines.

Prime Minister Khan’s forceful assertion that Pakistan could be “a partner of the United States in peace and never in conflict” underscores the country’s quest for a new path in the post-withdrawal regional scenario. As he has said eloquently, the cost of being part of a conflict as open as Afghanistan has been disastrous for the Pakistani economy and society with more than 70,000 dead and 150 billion dollars lost.

The Prime Minister’s unequivocal support for a political arrangement in Afghanistan that results from consensus among the Afghan parties is the right thing to do. The military takeover of Kabul will lead to a protracted civil war with unimaginable consequences not only for Afghanistan but also for Pakistan.

It is regrettable that relations between Pakistan and Ghani’s government have deteriorated at a critical time when the two sides had to work together to chart a common path forward. In a rare moment of frankness, Prime Minister Khan admitted Pakistan’s waning influence with the Taliban who stand on the cusp of a historic victory after President Biden declared his mission in Afghanistan ended.

Pakistan has already exercised its maximum influence, as evidenced by the signing of the Doha agreement which created the conditions for the United States to withdraw. To expect Islamabad to go beyond this is not only unrealistic, but also unfair to the country which has long been on the side of the recipients.

In another example of frankness, Prime Minister Khan’s criticism of how opaque game-changing decisions were made to plunge the country into the conflicts of others will certainly spark a much needed debate. For a long time, the Pakistani people suffered the consequences of the wars which were imposed on them without their knowledge, let alone consent. A reset of the decision-making process guided by the need to protect our interests is a strategic imperative.

How Pakistani-American relations will play out in the post-withdrawal period has been a controversial question, thirsty for a realistic answer. Especially since the history of bilateral relations established that the transactional approach was the guiding principle of the relationship.

Far from bureaucratic iterations, Prime Minister Khan has attempted to outline a “civilized relationship” with the United States based on “common interests”. He presented Pakistan as a country of “strategic importance” to America in terms of a huge market, youth explosion and geostrategic location with connectivity as a defining feature.

Prime Minister Khan’s political articulation to pursue a relationship with the United States and China, independently of each other, makes perfect sense for a developing country that faces enormous challenges. In what quickly emerges as a “cold war,” the Sino-US competition is poised to drag Pakistan into an unenviable position that the leaders of Islamabad would choose not to be a part of.

Relations with Washington and Beijing have immense strategic and economic value for Pakistan. At a time when President Biden continues to forge alliances, QUAD being one of them involving its Indian rival, Pakistan is to offer to be a bridge builder in a rehearsal of its role in 1971 when Islamabad came down. got the United States and China to break the deadlock.

The Prime Minister’s strong support for a relationship with China represents a multi-party consensus to advance strategic cooperation with the “Iron Brother”. This iteration also defines the lawless areas in terms of the country’s vital interests.

On India, Pakistan under Prime Minister Khan has made efforts to turn the corner with New Delhi. However, these bold peace overtures were rejected by right-wing hawks in New Delhi, and the annexation of occupied Kashmir made regional dynamics more complex, making peace a distant dream. Pakistan has clearly put options for peace and normalization on the table, provided that India can create space for the resumption of dialogue by restoring the status quo ante to the held valley.

At the time of writing, a meeting was underway in Islamabad where military and intelligence leaders briefed elected parliamentary leaders on the security challenges facing Pakistan. Only a united nation can overcome critical challenges.