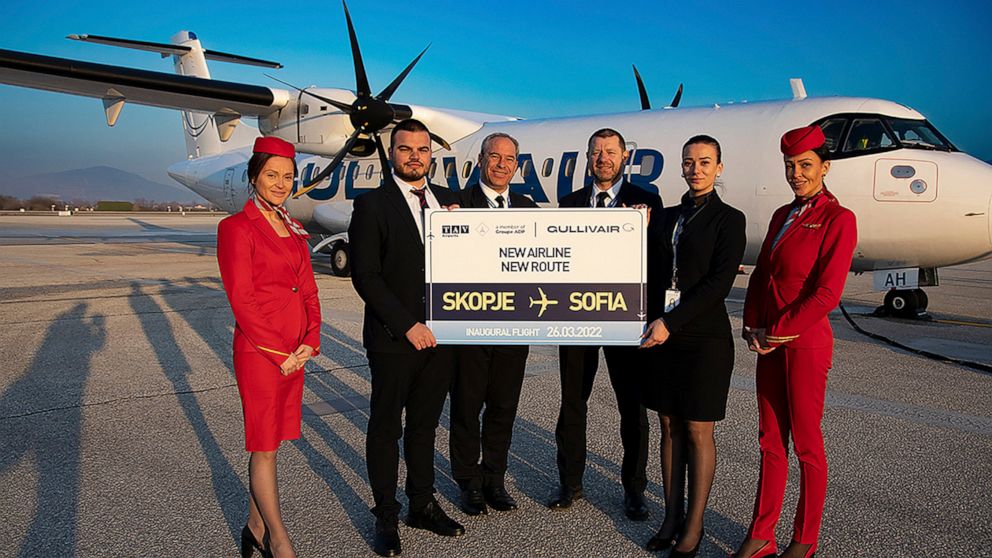 North Macedonia and Bulgaria have restored a commercial air link after 13 years of interruption, as part of a symbolic confidence-building measure

SKOPJE, North Macedonia — North Macedonia and Bulgaria restored a commercial air link on Saturday after a 13-year hiatus, as part of a symbolic confidence-building measure.

Relations between the two Balkan neighbors have long been strained as Bulgarians do not recognize a distinct Macedonian ethnicity and language, claiming the language is actually a Bulgarian dialect. Sofia has vetoed her neighbour’s plan to start accession negotiations with the European Union.

A plane from Bulgarian airline GullivAir was the first to land at Skopje International Airport on Saturday morning. GullivAir will operate twice a week with a 70-seat ATR 72-600 turboprop aircraft.

“The Sofia-Skopje (road) now connects the two capitals in just 30 minutes. We believe that this (route) has huge potential, both for tourist trips and for business trips,” said Metin Batak, General Manager of Skopje Airport “TAV Macedonia”.

Restoring the air link was agreed in January when Bulgarian Prime Minister Kiril Petkov visited North Macedonia in a bid to unfreeze relations between the two countries by pledging to deepen bilateral cooperation.

In 2020, Bulgaria vetoed the start of formal EU accession talks for North Macedonia, arguing that Skopje had failed to honor parts of a 2017 friendship agreement, particularly in regarding shared history and language.

This was felt in Skopje, which had recently settled a similar decades-old dispute with neighboring EU member Greece, which had apparently paved the way for North Macedonia to apply for membership. As part of the deal, the country changed its name from ancient “Macedonia”, which Greece said implied claims to its own territory and history.