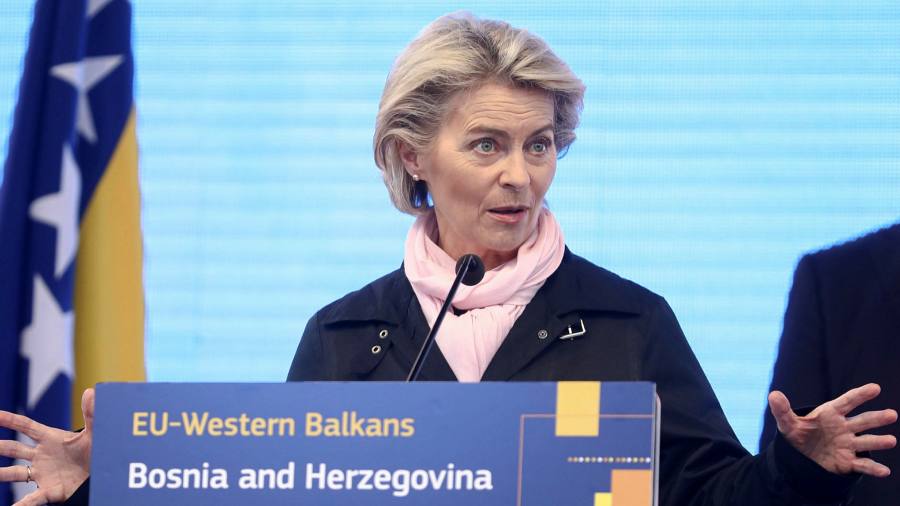 Your essential guide to what matters in Europe today. Delivered every day of the week.

The EU is expected to expand to include all of the Western Balkans by the end of the decade, according to a proposal by the bloc’s presidency holder that stunned other member states ahead of a summit next week.

The idea of ​​bringing countries like Serbia and Bosnia and Herzegovina quickly into the EU was launched by Slovenia on Friday. It precedes a meeting of EU leaders which will discuss the union’s enlargement to 27 members.

The proposal, made at a meeting of ambassadors in Brussels, stunned other member states and has been described by some as wholly unrealistic given the economic and political challenges in the region.

Enlargement is a very sensitive issue for the EU, which is divided on the necessity and the speed at which countries should be allowed to join the bloc. But the union is under pressure to continue accession negotiations with the Balkan countries which are also seeking to strengthen their ties with China and Russia.

The EU added 13 member states between 2004 and 2013 in rapid expansion. After that, Jean-Claude Juncker, the former chairman of the committee, vowed not to receive any further admissions until 2019 – but the candidate countries are getting more and more impatient as Brussels continues to drag its feet.

Diplomats from member states who want Brussels to speed up talks with the Western Balkans – mainly from the east and south of the bloc – are pushing for ‘ambitious’ language when joining the summit, but admitted that a firm deadline was politically explosive.

“We need a declaration. It is very important, ”said an EU diplomat. “And [one] with a date will not be accepted.

To further complicate the EU’s position towards the region and the challenge of its integration into the bloc, five member states – Cyprus, Greece, Romania, Slovakia and Spain – do not recognize Kosovo, which said its independence from Serbia in 2008 as a country.

Ursula von der Leyen, the chair of the committee, visited the Western Balkans ahead of the summit, reiterating her support for countries including Serbia to join the union.

But politicians in the region view the topic with acute frustration as appetite for further enlargement is low in a series of larger member states.

The committee, which is leading the process of assessing progress towards EU membership, said national governments should move forward with Albania and North Macedonia “as soon as possible”. The two countries should have started EU membership negotiations last year, but progress remains stalled by the lack of unanimous support from member states.

The Slovenian government declined to comment. North Macedonia, one of the candidate countries for membership, said it welcomed Slovenia’s boost to the talks and said it was “time for the EU to act” .