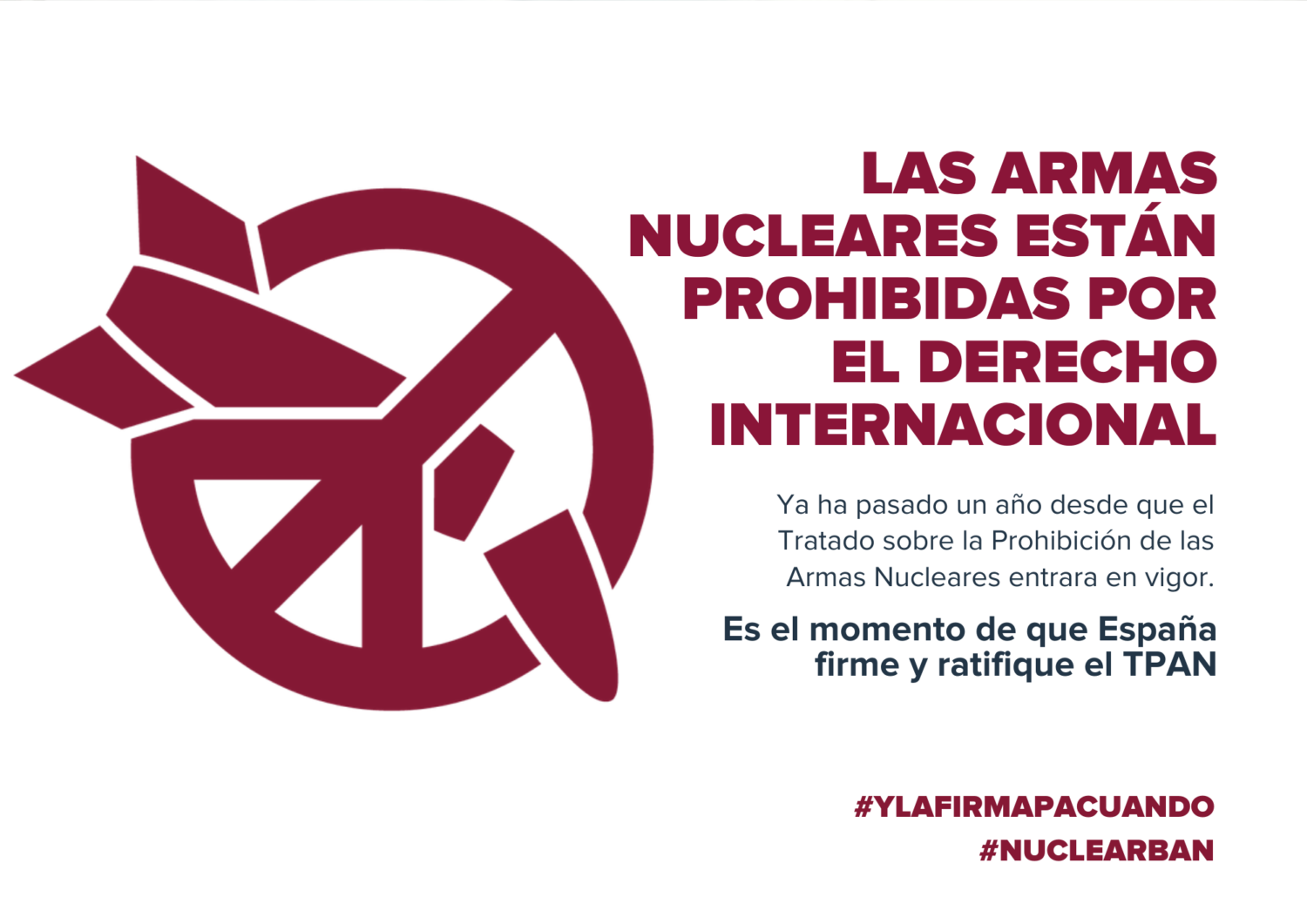 On the occasion of the first anniversary of its entry into force, more than thirty organizations, including Pressenza, call on the government to exercise leadership for peace through the accession of the Spanish State to the United Nations Treaty on the Ban nuclear weapons (TPNW).

The petition was sent to the government of Pedro Sánchez through various channels. We spoke to some of the representatives of the signatory organizations.

Below we reproduce the letter given to the government archives and presented to the media by Josep Mayoral -mayor of Granollers and president of Mayors for Peace (Europe)-, and Ana Barrero -president of AIPAZ-, among others.

On the first anniversary of the entry into force of the TPNW, 59 States have already ratified it, 30 have signed it and ratification is in progress, and 49 others have expressed their support for the Treaty at the UN.

We call on the Spanish government to accede to the Treaty on the Prohibition of Nuclear Weapons and to support its subsequent ratification in the Congress of Deputies.

And as a first step in this direction, we call on the government of Pedro Sánchez to follow the example of Norway and Germany, two NATO partners, and Spain to attend the first Conference of States parties to the TPNW in Vienna from 22 to 24 March 2022 as an Observer State.

The Spanish government has an excellent opportunity to exercise leadership for peace vis-à-vis its EU and NATO partners by aligning itself with the majority will of the Spanish and world population in favor of effective prohibition of nuclear weapons.

Indeed, a recent poll established that 89% of the Spanish population is of the opinion that Spain should join the treaty (only 4% oppose it) and various initiatives have been supported by several parliamentary groups. Despite all efforts, the objective of the Spanish government’s adherence to the NPT has not yet been achieved.

What is the TPNW and what does it bring?

On July 7, 2017, after a decade of mobilization by the International Campaign to Abolish Nuclear Weapons (ICAN) and its partners, the United Nations General Assembly adopted a global agreement to ban nuclear weapons, officially known as the Treaty on the Prohibition of Nuclear Weapons. (TPNW). A treaty that highlights the catastrophic humanitarian impact of any use of nuclear weapons. Two and a half years later, on January 22, 2021, the Treaty entered into force after obtaining the necessary ratification by 50 countries.

This new legal instrument offers a powerful alternative to a world in which there is no end to the threats of mass destruction. Before the adoption of the Treaty, nuclear weapons were the only weapons of mass destruction that were not subject to outright prohibition, despite their catastrophic, widespread and persistent humanitarian and environmental consequences.

The new agreement thus fills a major gap in international law. This Treaty is based on the rules and principles of humanitarian law and under no circumstances may countries develop, test, produce, manufacture, transfer, possess, stockpile, use or threaten to use nuclear weapons, nor authorize the stationing of such weapons on their territory. . The TPNW also obliges parties to provide assistance to those who have suffered as a result of the use and testing of nuclear weapons around the world, and to take steps to clean up contaminated environments. The TPNW thus contributes to the protection of the human rights of victims and the environment.

What difference does this make with the Treaty on the Non-Proliferation of Nuclear Weapons (NPT)?

Critics of the TPNW argue that it undermines the Nuclear Non-Proliferation Treaty (NPT) which came into effect in 1970. But reality shows that the TPNW has not been effective, although the total number of nuclear warheads has decreased , the number of possessing countries has doubled, and we are witnessing a new race to modernize nuclear weapons.

From the preamble, it recognizes their disproportionate impact on women, girls and indigenous peoples, urges more equitable participation of women in disarmament processes, assistance to victims and reparations for the environmental damage they cause . By explicitly and unequivocally prohibiting the use of nuclear weapons, the TPNW sends a strong signal that their use would be unacceptable from an ethical, environmental and humanitarian point of view and would also be illegal under international humanitarian law (IHL).

Nuclear weapons are the most inhuman and indiscriminate weapons ever created. They violate international law, cause serious environmental damage, jeopardize national and global security, and divert vast public resources from meeting human needs and sustaining life on the planet. For those of us who work for a culture of peace, human rights, the rights of planet Earth, the rights of women and children, total and universal disarmament, justice, research and education for peace, memory, dialogue, universalist values, cooperation, multilateralism…, the ICAN Campaign and the entry into force of the TPNW offer an extraordinary opportunity to continue to unite for the construction of world peace.

While the risks of ignoring the treaty are unaffordable, the opportunities for peace that open up with its ratification challenge the Spanish state and its entire population.