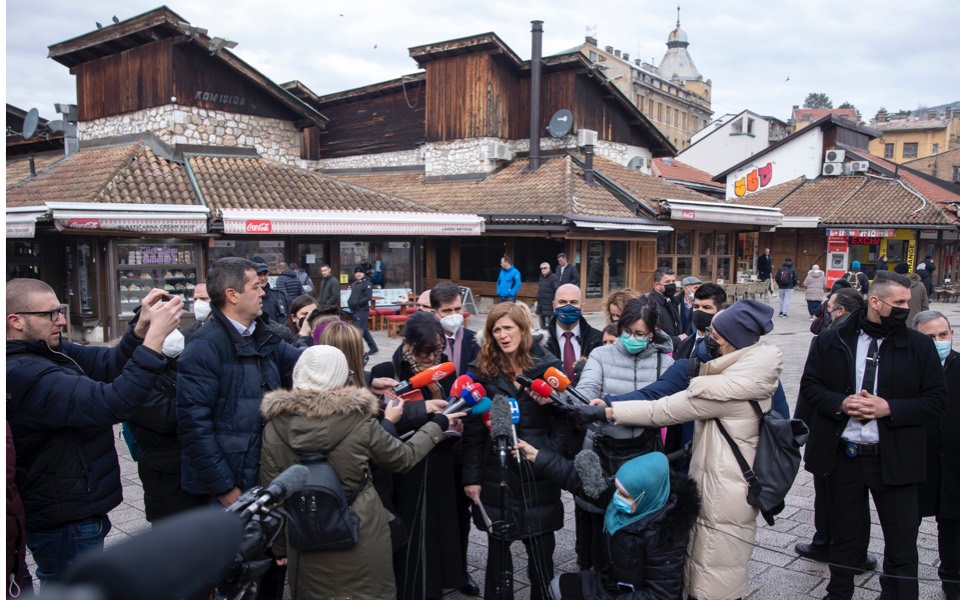 The Balkans and the (new) Pandora’s box

USAID Administrator Samantha Power (center) speaks to the media in downtown Sarajevo, Bosnia, January 20. Power, the first US official to visit the Balkan country after the US recently imposed new sanctions on Bosnian Serb leader Milorad Dodik, added that more sanctions have come in on others who, like him, engage in corruption and threaten to undermine the US-brokered peace deal for Bosnia 26 years ago. [AP]

Despite considerable progress, the Balkan region may not look much different in the post-pandemic era unless a real sense of political responsibility is developed. Politics is meant to serve, not the other way around. Nepotism and corruption undermine affirmative action and legitimate civic aspirations. Independent judiciaries are needed because courts in most of the Balkans are subject to political influence. Moreover, change will require the region to get rid of unreliable and corrupt politicians.

Advocated and even initiated by Greece at the European summit in Thessaloniki in June 2003, the process of accession to the European Union offers an appropriate framework policy of the stick and the carrot. Aristotle said it well in “Ethics in Nicomache”: “Impose chastisements and sanctions on wrongdoers and award honors to those who do good deeds.”

The wound healing process is not over – from Srebrenica to Batajnica and Racak. Yet there are ungodly plans for the breakup of Bosnia and Herzegovina and the secession of Republika Srpska. At the same time, ideas and discussions behind closed doors are circulating for a partition of Kosovo (north of Mitrovica) with Serbia and/or its union with Albania.

New proposed border changes and a new forced exodus of populations will open a Pandora’s box, with a predictable ripple effect beyond. The history of the Balkans teaches us that border changes begin with a known beginning but continue to an unpredictable end.

Beginning by reaffirming the territorial integrity and unity of Kosovo and Bosnia and Herzegovina, the United States and the EU, together with those states in the region that respect international law and support the territorial status quo, should rule out any further border changes, as well as land and population exchanges.

Alexandros P. Mallias is a former ambassador to Washington, Skopje and Tirana, and author of the book “The Borders – Revisionism”.

Biden administration to weigh in on crypto