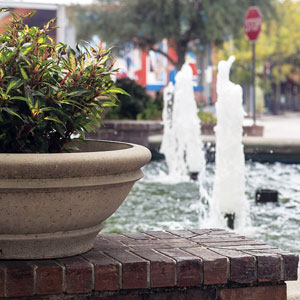 This story was also published in Carolinian, the University of South Carolina alumni magazine, which is distributed to members of the UofSC Alumni Association. Embark on the Carolinian mailing list by joining the association or by make a present equal in value to membership fees.

If you think Five Points is just a college bar district, think again.

The village down the hill has attracted students from South Carolina for over a century, and not just to celebrate. And for many who move to the capital after graduation, Five Points is still an integral part of their lives.

“It’s an incredibly unique neighborhood, and everyone is a regular,” says Kelsey Hennighan, Executive Director of the Five Points Association. “If you go down any afternoon for lunch, or Sunday for brunch, or even for an early dinner, you see people outside eating, talking, you seeing people with their dogs – we are probably the most dog friendly neighborhood in town. ”

Hennighan would know. As director, she coordinates the efforts of economic development, beautification and safety of the neighborhood, not to mention the annual celebration of St. Patrick’s Day. But she also knows the scene, having worked as a hostess at Saluda as an undergraduate student before taking a public relations position at Spirit Communications.

“When I applied for the director position, I kind of came full circle,” she says.

Carolinian caught up with five former students who, like Hennighan, can’t shake Five Points out of their system.

Richard Burts – The Fountains and Beyond

If you ask about Five Points’ greatest visionaries, one name comes up time and time again: Richard Burts.

Perhaps best known for restoring historic 701 Whaley event space in Columbia’s Olympia neighborhood, Burts actually started his career as a restaurateur, launching a series of Five Points hotspots in the 1990s – Monterey Jack’s, Poor Richard’s, Hannah Jane’s, Saluda’s. And it was during his tenure as president of the Five Points association that he discovered his passion for real estate development.

Some paint, others sew, others draw. My point of sale creates unique spaces. That’s kind of why I get up in the morning.

It was 1991, maybe 1992, and Burts, a former economics student, was at the back table of Linda and Dennis Hiltner’s Gourmet Shop with a handful of neighborhood chefs brainstorming a landscape project. of street. The focus shifted, however, to what would eventually become the Square and Fountain at the intersection of Greene, Saluda, and Harden.

“We knew it would be expensive, we knew it would take a long time, but we wanted to do something real where we could show everyone what we could achieve,” says Burts. “Once we had a budget, we asked the city to match the APF in dollars. Our budget was approximately $ 400,000.

The project would take six years, and although Burts was intimately involved throughout, it was quick to take credit. He names his successor in the association, Jack Van Loan, who helped secure funding, as well as the Hiltners, architect Doug Quackenbush, landscape architect Mark Cotterill – the list goes on.

“Nothing is ever done by one person,” he says. “You need a lot of different people to come together. And you know, it’s not even work when it’s fun, when you enjoy each other’s company, when you enjoy the creative process.

And he still enjoys this process. After Fountain # 1, he helped install a second fountain at the other end of the Avenida Saluda commercial corridor. Then he worked on Centennial Plaza, commemorating the village’s 100th anniversary and honoring Van Loan, a former prisoner of war. Then he helped facilitate the installation of Jay Hubbell’s sculpture in Saluda and Devine, the Blue Sky mural behind Groucho’s Deli, and most recently an alley landscape project off Harden Street.

Now Burts is exploring a pair of new projects. The first is to reallocate a former taxi garage behind the White Mule and Loose Lucy for an unspecified purpose. The second would pierce a covered passage connecting Avenue Saluda to a courtyard adjoining the railway line and would open several hundred feet of new storefront for manufacturing spaces.

Neither project has a green light yet, but Burts is already dreaming – and his fingerprints are all over the place. “I love the creative process, it’s just that my canvas is different,” he says. “Some paint, others sew, others draw. My point of sale creates unique spaces. That’s kind of why I get up in the morning. I love to go out and find the next deal.

Share this story! Let your friends on your social network know what you read